A while ago, I chose this book as a book for First Lines Friday. I read a glowing review of it (which you can find if you click the link to the FLF) and I knew that I had to read it. Dynamic characters, an Asian inspired world, and an interesting world? I was sold right away.

Yet, it was a slow book. It’s around 500 pages and a lot of it is filler for setting the stage. Establishing the characters, the plot, the world. But the world isn’t exactly explained to you. I wish some of it was, but it wasn’t too hard to pick up on in the end. The plot was a slow burn one, too. You had to pay attention and pick the pieces up.

What really stood out to me were the characters. Lan, the leader of the clan. Hilo, his brother and right-hand man. Shae, the sister who left to live her own life and then comes back. Aden, the orphaned mixed-blood boy who wants to be one of them. The grandfather, the once great leader of the clan and now is diminishing. Then, there are the side characters that crop up.

All of them were fantastic. I grew to love and understand all of them over the 500 pages. I came to really care for them. I nearly cried towards the end when I thought something was going to happen to one of them. Lee got me very engaged in the story. While I thought the plot could have been a bit quicker with more ground covered, the length of the book gave enough time to flesh out the characters really well.

What I can say is that I’m excited to read the next book when it comes out!

The two would-be jade thieves sweated in the kitchen of the Twice Lucky restaurant. The windows were open in the dining room, and the onset of evening brought a breeze off the waterfront to cool the diners, but in the kitchen, there were only the two ceiling fans that had been spinning all day to little effect. Summer had barely begun and already the city of Janloon was like a spent lover — sticky and fragrant.

Another week, another book. My choice is kind of unconventional for me. It sounded like something I’d like, but it’s not one that I’d have actively sought out or even heard of until I read a great review of it. It’s magic mixed with gansters mixed with fantasy. In other words, a pretty interesting mash-up. 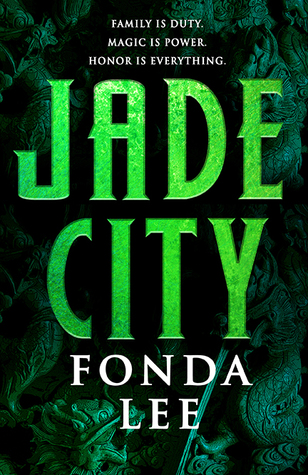 I got this book rec thanks to Alienor’s review over on her blog. It’s a great review, so check it out here! It sounded right up my alley and like a book I’d like to give a try, so I got a hold on it through my library and now it’s in my hands. (Which aren’t tiny like Trump’s or Chantel’s, for the record.) I’m pretty excited to give it a go!

Once upon a time there was a pair of pants. They were an essential kind of pants — jeans, naturally, blue but not that stiff new blue you see so often on the first day of school. They were a soft, changeable blue with a little extra fading at the knees and the seat and white wavelets at the cuffs.

Again, another short entry but I don’t think anything more than this needs to be said about this book.

This was a recent purchase of mine but it is certainly not a book that’s new to me. I bought it because it was cheap on Amazon but I was suddenly feeling nostalgic for the series and wondered if I would still enjoy it now despite years of distance.

The Sisterhood of the Traveling Pants by Ann Brashares

Like I said before, this series is not new to me. I’ve read the first three books and by the time the fourth and fifth book came out, I was no longer interested in the series. I remember this series being great. The chapters of the book contain famous quotes and/or proverbs and I used to record them in a journal because I was that much of a dork.

Honestly, the first movie was very well done. Not so much the second, but whatever. I used to watch the movie long after I had stopped reading the books and it was one of my pick-me-up movies.

I also remember the series being very raw and realistic when it came to sex, divorced parents, illness and death, isolation, and feeling like you are stuck in one place. Those are just a few things I remember but I know there are a lot more.

At some point, I’ll pick this book up again and if I enjoy it then I will continue on.