TW: Kuang actually compiled a list of triggers on her blog!

END_OF_DOCUMENT_TOKEN_TO_BE_REPLACED 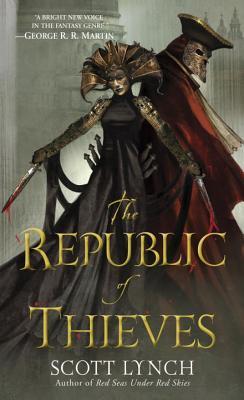 Well. That was a disappointment.

I gave Red Seas Under Red Skies five stars because I had been so taken in by the characters and the plot and everything about it that I hadn’t been able to believe it. And now, after reading this since February, I’m kind of disappointed. The last 100 pages were fantastic and the first 100-200 pages were great, but the middle really lagged.

This is basically going to be a list of things I wished had been different.

I wish that Sabetha had been introduced before this. She’s been hinted at for two books and this was it. And she didn’t impress me, nor did the relationship she had with Locke. As another reviewer said, they never exactly had chemistry on the page. A whole lot of tension, but convincing romance? Nope.

I really wanted her to stand out like the female characters from Red Seas but she didn’t. And I think that it would have been better if she had been in previous flashbacks from other books so we could get a taste of her character before she was there on the page. Get a taste for their relationship, too.

Because, I have to say, the flashbacks didn’t help much. They were mainly combative and not the type of relationship that I really root for. And that was the same case in the actual story. They seemed to hate each other so much that it never convinced me to root for their relationship. I wanted them to either shut up and get over themselves or fuck like bunnies until it was all done and exhaust each other.

Then, the plot. It was weak. The flashback’s plot was a bit stronger, but not by much. It was stretched over nearly 700 pages and there weren’t enough twists and turns to make it stay interesting for me. The twists came from Sabetha and Locke’s frustrating relationship… but they weren’t really twists since it was the same song and dance over and over again.

While I did enjoy this, about half the book could have been edited and cut out to make it a stronger plot that was actually focused on the political intrigue that was at the heart. Seriously, I forgot about it because it was so nonexistent, which reminds me of how Six of Crows was totally about a heist but 50% into the book the said heist never had started.

This is a great series, but this is also the weakest book in it.