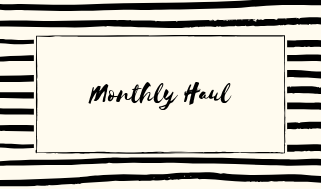 One thing y’all who took our 2018 survey said was that you wanted monthly book hauls. So, here we are! The first one! Since I celebrate Christmas, I’m super excited to be doing this because I got a lot of cool stuff.

All these pictures are my own! A lot of them were on our bookstagram, so there are some repeats. Then I also took pictures specifically for this! If you don’t follow our account, you totally should. We post multiple times a week and I usually try to do a story each day.

END_OF_DOCUMENT_TOKEN_TO_BE_REPLACED

We have news, guys.

If you guys didn’t know already, we started an Instagram! If you haven’t checked it out already, you totally should. We’re getting it started right now.

However, we have made the choice to stop doing these posts on the blog. From now on, we’re going to take pictures of what we get in our boxes exclusively on Instagram. So, if you don’t follow us, you might want to so you can see them!

This month, I only got one book. I was trying to be good since it was the holidays and all. Don’t need to be overspending, you know.

I chose, The Chalk Man!

I’ve heard good (and some bad) things about this book, but I’m still excited to give it a try since it looks up my alley!

So, this is the horror box that I’m starting to get. Based on my first box, I’m totally impressed by it. There was so much stuff in it! First, this is the brief summary they gave of the items.

The new release they included was an anthology, Tales from a Talking Board. While it doesn’t have great ratings on Goodreads, I’m still excited to see what’s in store since I never heard of it. Same with the second book, Vermilion. It looks unique and exciting. I think with the two books they sent, I was most impressed by how they chose books that I had never heard of rather than something I might have recognized or even owned. 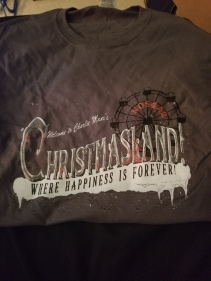 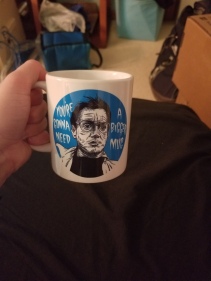 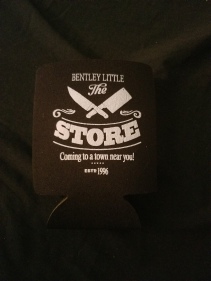 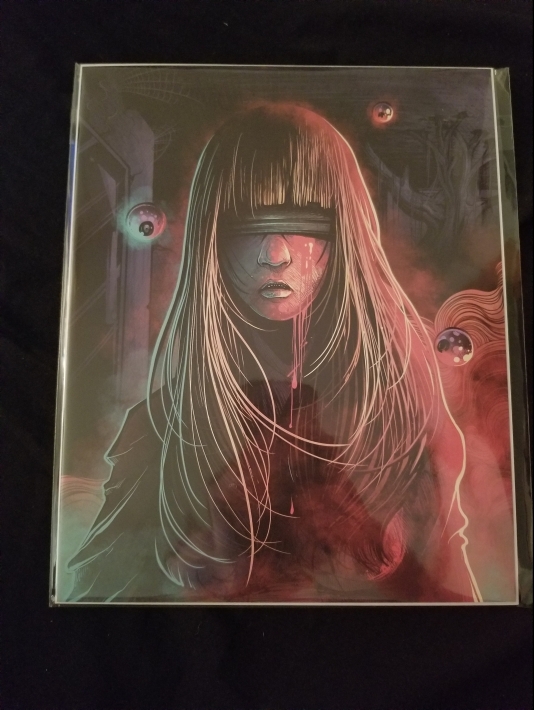 Every box, they give some type of clothing. This month it was a shirt based off of a Joe Hill book. Sadly, I’m not a fan of Joe Hill. Tried a few books by him and they’re not my favorite. Next, I got a mug! It’s punny, too. And from Jaws. The picture doesn’t show it, but it says “You’re gonna need a bigger mug.” I quite like using it for wine. Next, beer cozy from something I don’t know. Next, a pin that, again, I don’t know what it’s from. Fifth, it’s a bit of packing tape that’s themed from The Shining! It was designed for them to have the carpeting from the movie. Sixth, there are bookmarks. Yes, two. One for each book! Finally, it’s a piece of original art from Bird Box, a book I’ve been meaning to read and actually thought that I owned.

All in all, I really liked this first box!

As usual, a nice bookmark and a short story were included. I also got a new addition to my keychain (which is getting a bit out of control now) and some string lights! Maybe if I can figure out how to use them, I’ll start using them in some Insta pictures. The book is Signal Loss, the seventh book in a detective series. While I really like the premise, I don’t like that it’s the seventh book. I’m going to read it, but if I like it I’ll have to go back and read the whole series.

In December, I only got Book of the Month in terms of subscriptions. I got three different books that I’m eager to read as I’m building a small collection now.

The City of Brass by S.A. Chakraborty – Goodreads

This is a fantasy series featuring Muslim characters and is also ownvoices. This is so exciting because I’m very eager to read a fantasy story so different from every other European inspired fantasy world out there. This is something different and I can’t wait to read it.

Every single review posted by people I follow on Goodreads and even people I watch on Booktube have had nothing but good things to say about this. The title and cover are likely misleading because this isn’t a normal contemporary. It features a lot of diversity which I would not know without reviewers pointing it out. It deals with issues of sexuality, race, Hollywood and the filmmaking industry. It’s long overdue that I read this book. I’m so ready.

Future Home of the Living God by Louise Erdrich – Goodreads

The world is ending in this novel, it’s dystopian, and the cover is stunning. I want to go into this knowing as little as possible. I skimmed the summary but I feel like it would be knowing too much and I am prepared to be surprised.

That is it for me for my December subscription. As Caidyn said, we now have an Instagram and will be posting our subscriptions over there moving forward. It’s a lot less work.

Spoilers for @owlcrate! 🧜 I got this and really enjoyed the box! Granted, I figured out the book and I so enjoyed @authoradalyngrace's debut, which meant I was going to want it no matter what. The cover is so gorgeous! 🧜 The bento box, glass cleaner, and bookmarks are also awesome! Admittedly, I'm looking to give away the cards since I'm not into the fandom, so if y'all want them, tell me! Same with the sample of Cassandra Clare's new book. I'm not into that series. 🧜 #owlcrate #owlcrateunboxing #booksubscriptionbox #bookstagrammer #bookstagram #allthestarsandteeth
It's a review! ⭐⭐⭐⭐/5 • CW: rape (on the page but not in-depth), kidnapping, murder, alcoholism, death of an animal, and mention in the book of suicide, death, other rape, teen pregnancy, abortion, overdoses, and alcohol use • I read this book in one day. One sitting, too. It only took me a couple of hours to read fully. It's a small book that's very focused. I remember seeing this book as a teenager and I never reached for it. When I was a teen, YA wasn't a huge genre like it is now. It also never appealed to me like it did for others. And I never reached for this book. • The reason I finally picked it up is because of it being reissued and updated. I wanted to read it first, then maybe buy it. And I fully intend to buy it and maybe reread it to see the changes that the story went through over the decade since it was originally published! • This book was just really good tbh. It's sad because you have Parker grappling with so many things, as well as just the subplot that slowly gets introduced through flashbacks. I just found it very unique. Honestly, I probably would have digged this book as a teen, but I just wasn't interested in YA like I am now. • Honestly, I plan on buying the new version and comparing the two! It was a great read that I'd recommend. • #bookreviews #bookstagrammer #bookstagram #bookreview #crackeduptobe #courtneysummers #review #yacontemporary #yafiction
I finished this! No review as of yet, but it was a great read. Super imaginative and unique. I loved how it tackled the topics. Can't wait to get my hands on the second book! 🧟‍♂️ #blackathon2020 #blacklitchallenge #bookstagrammer #bookstagram #justfinished #yahistoricalfiction #zombies
Okay, y'all, I'm busy. Let's be honest here. And that means I'm going on a semi-hiatus through March! I'll be on and post some, but I'm not promising it'll be a lot. 📚 I'm all for self-care and this is my way of doing it! 📚 #personalpost #bookstack #bookstagrammer #bookstagram #selfcare #semihiatus
Another day, another book about Ted Bundy. 🤷‍♂️ Bundy is a fascinating killer, imo. While this book didn't really cover much new ground -- minus the child sex abuse that Molly Kendall wrote about in her section -- I found it informative. Another angle and perspective to his person and crimes. Definitely want to own this one someday! 🗡️ #bookstagrammer #bookstagram #bookreview #tedbundy #thephantomprince #recentlyread #truecrime #serialkillers
I finally got this one from the library! I'm slowly making my way through it and, honestly, I can't wait to see how this book ends up. So excited! I really enjoyed the first book and this one is shaping up to be just as good. 🔥 #bookstagrammer #bookstagram #heartofflames #nickipaupreto #amreading #yafantasy #currentlyreading