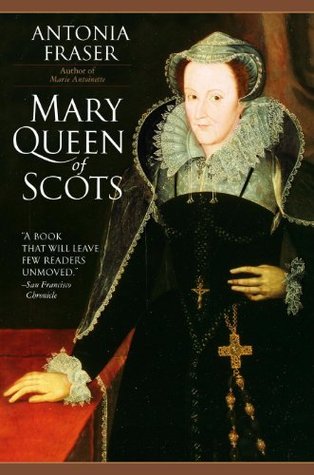 I did a buddy read with the ever lovely Jaynie, who I read Elizabeth I with earlier this year!

And, this was really good. At times, it was pretty dull because it felt bogged down by details I didn’t need to know — names, family history, etc. — but most of the time it was interesting. I think it picked up speed after her second marriage to Darnley because that was when everything kind of went downhill for her.

One thing that came up when Jaynie and I discussed the book was Mary’s childhood and how, in a way, it was a disadvantage to her. She had a relatively stable childhood in France, removed from the people she would eventually govern. Scheming wasn’t her forte, although she did it throughout her life. She led with her heart and was an action person rather than hanging back to see how things played out. She didn’t exactly keep herself out of plotting or find a way to be able to deny it.

Very different than Elizabeth, her rival. Elizabeth had a very unstable childhood. She knew the players at the court in and out. She always found a way to keep her hands off of scheming so she didn’t get in trouble for it. And when she did get caught, she was able to get out of it eventually.

It’s hard not to compare the two women. Queens around the same time, same dynasty and family ties, both very ambitious. Yet, they were very different people and Mary’s upbringing was a deficit to her. She was a foreign queen in the end. Very different than the people she was meant to govern. She was basically French and she had a different religion than most of the people and she seemed to think more of her own passions than of what something would do to the people.

Their lasting image is also very different. Elizabeth is seen as very apt and smart while, in most of what I’ve read, Mary comes off looking like an idiot. I’ve read a fiction book about her and she really was an idiot. Yet, the movie that came out last year, which has the same name as this book (different source material, though — they used John Guy’s book, which I also plan on reading) made her look like a genius.

Fraser definitely came down in the middle of both those extremes. I loved how balanced the biography was. She showed Mary’s flaws and strengths, most of which go hand in hand. Fraser definitely knew her stuff about Mary. She cared about her subject but was as unbiased as she could be on the topic. In short, I really enjoyed this biography. It was good and an enjoyable read.

Have you read this? What did you think?
What makes a biography balanced for you?