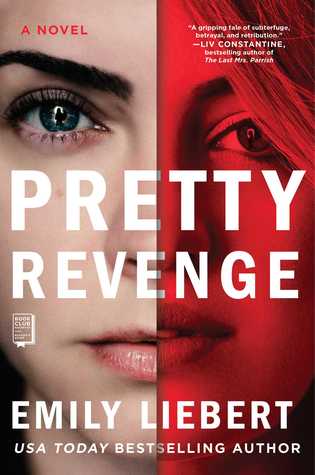 I received this from Netgalley in exchange for an honest review!

What a damn disappointment.

I was so into this book for, about 60-70%. Then I started seeing the writing on the wall and that it wasn’t actually going to be that good. But, let me start to explain why after a brief description of the books and characters.

Kerrie O’Malley has just lost her job and is in a relationship she doesn’t want to be in anymore. Her parents died when she was young and her grandmother, who raised her, died in some way. Then, there’s Jordana Pierson. Everything about her seems perfect, but she’s married to an unfaithful man who doesn’t like the wedding planning company that she throws herself into.

But, Kerrie knows Jordana. Because Jordana did something horrible to her a long time ago. Now, it’s time for Kerrie to take her revenge.

So, Kerrie gets herself set up as Jordana’s assistant at the business. And she starts picking away at things to ruin what Jordana has.

Then the other stuff comes into the book that I wasn’t a fan of.

Kerrie kind of starts a relationship with some guy who’s planning a wedding. Kind of because the romance never was that important to the plot or story. There’s another secondary plot that it gets tied up in, though. Kerrie has a neighbor who was once an investigative journalist but isn’t working like that now because she had a kid. But, the woman wants to blow the lid off of some guy’s bad deeds. Which happens to be the future father-in-law to the man. Then Kerrie decides to help her. For no reason.

And then there’s Jordana. The unfaithful husband didn’t add much to the story except, maybe, understand her drive to succeed. She also has a very messy relationship with her parents that gets very explored in the book. For no reason, tbh.

While these little journeys might seem interesting and fun, the book is only 320 pages. The actual plot of the revenge Kerrie wants to get on Jordana is forgotten for a very long time. It just kind of happens in little things, but the attention of the book is more put on the things that I explained above. None of which feature in the description of the book.

Look, I could care less about Kerrie and her infatuation. (I did care less, tbh. Hardcore skimmed those sections when I saw they were coming.) The plot to destroy the random guy? Also not what I was there for. Jordana’s stuff with her family? I found that more interesting, but, again, wasn’t what I wanted from the read.

The book turned out to be deeply unsatisfying for me. I wanted a dark thriller with two conniving women pitted against each other, battling for whatever the fuck it was. That’s what I wanted to read about. In the end, the book was very rushed when it got to the revenge Kerrie wanted on Jordana. It was very anticlimactic when we finally got to the reveal about different things.

The book lost itself completely. I didn’t find it twisty or bursting with suspense like the description says. It was a completely unsatisfying read for me, one that I wouldn’t recommend as a thriller.

Have you read this? What did you think?
What book went completely off the rails for you?

One thought on “Book review – Pretty Revenge by Emily Liebert”