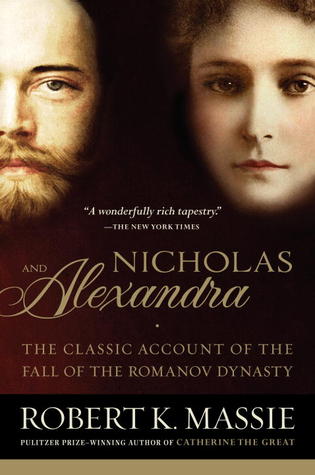 Ever since I was 9, I’ve had a weird obsession with the end of the Romanov dynasty. It was mainly because of Anastasia, but I just love the story. It’s so interesting and absolutely heartbreaking. When I got to their deaths, I did start crying. As I said, it’s just a sad story and a very sad, unneeded, violent end to a family who could have lived out their lives peacefully together.

But, onto the book!

I thought that it had really good pacing. It never felt like I was being bogged down in a certain period of time while I was reading. It all kept moving at a swift pace. In all honesty, I was surprised that the book skipped over the kids so much. The main focus was put on Alexei, which didn’t surprise me much. I think that was because Massie put out that his illness was a major part of their downfall.

The book was also well-balanced. It never felt as if either person took up too much time or space on the page. Nicholas and what he did were evenly put down, then there was time for Alexandra. Then there was time for the both of them and both of their reactions. Again, that was mainly about Alexei and his illness. Because, honestly, he was a very sick boy and it was a wonder that he lived as long as he did.

However, I do wish that the book had taken a different spin on the Rasputin story. I don’t think that he was a good guy, but he was very complex. There was a lot to who he was and it’s hard to capture it. Massie did a pretty good job of telling that story, but it’s also difficult because this is a classical take on the story. The book was originally published in 1967 and I doubt that much has changed in the text since that point.

I’m not saying it’s a bad thing. Rasputin wasn’t the best man in the world and he did a lot of not great things. His death also cracks me up because of how excessive it had to be and the fact that nothing they tried killed him. BUT, the Rasputin relationship kind of annoyed me. I also think that reducing it to Rasputin’s fault that the Romanov dynasty fell apart is very reductive. Nicholas wasn’t a great Tsar. Let’s be honest. He wasn’t. He cared for his people, but he wasn’t a fount of strength that the people turned to. And his wife was very unpopular even before Rasputin came onto the scene.

Still, this was a good book. I don’t know if I’d read it again anytime soon, but I thought it was a good source of information since most books do focus on the children rather than the parents. I just think I would like a book that took a different stance and was a bit more updated with current thought than this one.

What historical figures do you think need an update in books?