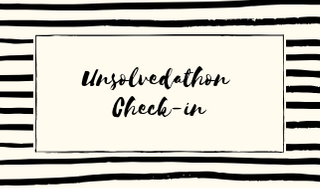 And, I’ve stuck with this. I’m actually very proud of myself since, usually, I completely bomb readathons like this. But, here we are. 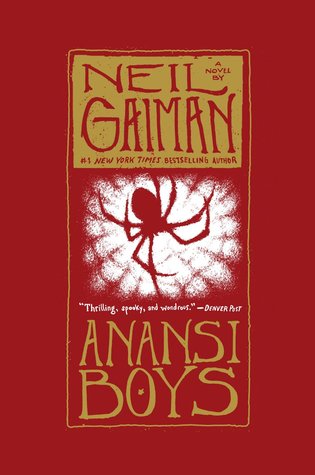 This was a reread for me! However, it was such a reread that I honestly didn’t remember anything save a few pieces. Very basic things, too. That also, somehow, got woven in with Neverwhere. I don’t know how my mind does this, but it does.

So, this book follows the son of Anansi. It’s a part of the American Gods universe since Anansi (or, Mr. Nancy) was a part of that book. However, it’s very different. It’s not some epic tale that captures literally every genre in it. It’s more of a journey of a man, Fat Charlie, finding himself and escaping an eclipse that he never even knew he had.

Now, I don’t love this book. It’s very good. But, it’s slow. And, I also never quite warmed up to Fat Charlie as a character. By the time he really came to himself, it was far too late in the book and I wasn’t interested in that story. It also gets very confusing at times — like, things start happening and they’re not well explained.

But, it is a very good book. It’s just not one that I love. The story of Fat Charlie finding himself is a great story to have. I loved how Gaiman wove African tales in about Anansi just messing with people. Yet… Charlie wasn’t a dynamic character. And he carried the weight of the story.

I realize that I’m rambling, but I don’t have much to say about this book. It’s very good, but it pales in the shadow of American Gods. Gaiman has passion and it was a fun book, but then it got tiring since it felt like it was a lot of the same being covered over and over again. And, I wasn’t in the mood for it by the end.

A Study in Charlotte by Brittany Cavallaro 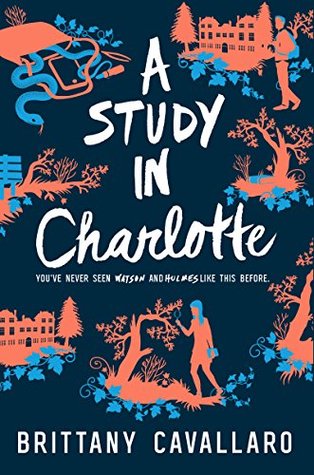 CW: heavy drug use and addiction, past sexual assault, past rape, use of rape myths, and drugging

I’ve had this on my radar forever. Why? Because I’m so fucking nerdy about Sherlock Holmes. I have watched all the important episodes of BBC’s Sherlock — fuck everything about the fourth season; I refuse — and really enjoyed it. Tbh, it made my high school. And even now. I made a lot of friends in that fandom even though I hate what it’s self-destructed to now.

But, even more of a confession time. I’m nerdy. Hang on through this because it brings us through the rest of the review since it explains why I love it so much.

I role-play online. Through email and a website. And, I don’t RP as original characters. I write as Sherlock Holmes, based off of BBC’s Sherlock. However, it’s a female Sherlock.

For me, I do it because it keeps me in touch with my feminine side. And, I get to act as apathetic as I want to since it’s very prohibited in the field that I am going into. Aka, I can be a huge ass and it’s perfectly normal and acceptable. Also, this is how Chantel and I really met. We met on that website, exchanged emails to continue RPing, and, well, started talking outside of it and quickly became close. We still RP, actually. To this day. I have replies in my inbox I need to get to sooner or later.

Reading this book made me feel like I had finally met my Sherlock — the Sherlock that I love and live and breathe online — in person. Except as a teenager. I loved Charlotte. And I loved how this book took the angle that Holmes and Watson were real, had kids, and these are their ancestors.

It was just beautiful.

The mystery was a lot of fun, but, really, the characters really stood out for me. Jamie was a fun narrator/side kick. I loved how he had his anger issues and how that, then, impacted Charlotte with her past trauma and drug use. I mean, it was so brilliantly woven together.

I wasn’t expecting it to be as dark as it was. There are heavy rape themes that start from chapter one or two and carry on throughout the rest of the book. If that’s a trigger for you, be careful. It’s not one for me, but it’s not content I reach for so it took me back and nearly made me stop reading the book. However, I thought it was carefully handled and the impact of it was well detailed. In other words, it didn’t feel like a shock value addition. It truly impacted the characterization and the plot.

Basically, this book hit everything I never thought I wanted from it. It resonated with me and I adored it. And I honestly cannot wait to tackle the rest of the series.

The Waking Forest by Alyssa Wees

Here we are. The first week of the readathon and I’m already using one of the cheats since I didn’t like this book.

I’m having to use the Corrupt Cop on this one to move ahead to the next prompt.

I just couldn’t get into this book. At all. I don’t know what it was about it, but I was lost from the first page and it never got better. The characters didn’t stand out at all. They just felt flat and boring. The plot was dull. Things were happening, but nothing was moving. If that makes sense.

I mean, it follows Rhea in one perspective. She has a lot of sisters — all who have names that start with the letter “R” — and she meets this shadow boy who wants to play a game. A game she can’t escape. Then, there’s the Witch who meets a boy who’s a fox yet not a fox.

I figured it out pretty early where the story was going to go. And so, when I hit part two — which is where I DNFed it — I wasn’t shocked. I actually had every intention to see this through to the end, even though I wasn’t enjoying it, but I picked it up and I did this:

I think the moral to this story is that it didn’t work for me. Nothing about it worked for me. Even though it looked like it was really going to be good, kind of like The Wicked Deep was because it gave me that vibe from the cover and description. But, it wasn’t.

Are you doing the unsolvedathon? How are you doing with it?
Have you read any of these? What did you think?