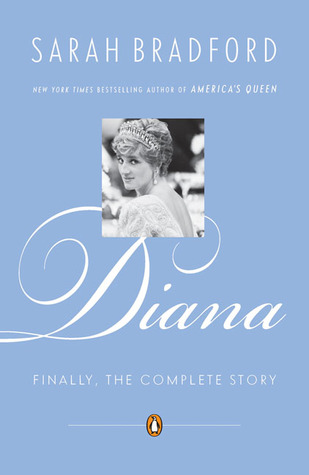 I know that I’ve written on this blog about Princess Diana before. She’s an incredibly difficult subject to write about because, even 20+ years after her death, she’s so polarizing.

What I liked most about Bradford’s biography is that she was a balanced author. Very balanced with a topic like this. She tried to keep it open with either side of the story. Of course, she was more likely to err in Diana’s favor, but when she was obviously doing wrong, she pointed it out.

Such as, the story about Diana throwing herself down the stairs when she was pregnant with William. Bradford went through the sources and, eventually, concluded that it was something Diana made up. Diana fell down some stairs, but it wasn’t a suicide attempt. It was her personal manipulation of the press and public. I’ve always heard that story and seen it treated like it was true. So, it was refreshing to have an author challenge everything.

And, really, Diana was a mess. I’ve always said that right when Diana died, she was coming into her own and getting better, but she was never a very stable woman. She had major ups and downs. Bradford put it as her need to self-sabotage. I’d say it was more whatever mental illness she had — and, I’m not going to try to diagnose her — leading her to unfound conclusions.

That still doesn’t discount that she was an amazing woman who did a lot of good in the world. She was simply a flawed individual like the rest of us. But, I really enjoyed Bradford’s objectivity since this is still such a polarizing story. Periodically, my mom and I fight about it since I like being the devil’s advocate. My mom loves Diana and hates Prince Charles. So, I point out Diana’s flaws and try to show her what Prince Charles might have felt.

She doesn’t appreciate it and ends up getting very mad at me. But, see? Polarizing.

I also loved how easily this read. It wasn’t dull or overly complex. Bradford used a lot of primary sources. There were tons of quotes and she let those do the talking for her. I appreciated that because it was nice to read what the people who knew Diana had to say. Not all of it was good, obviously, but it was real.

I’d definitely recommend this book to people who want to read about Princess Diana, but don’t want to have to pick a side in the ongoing war.

Have you read this? What did you think?
What are your thoughts on Princess Diana?