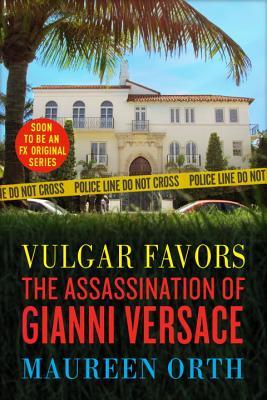 CW: murder and drug use

You see that sticker on the book? About the FX series? Yeah, that’s the only reason I read this book. I loved that season of American Crime Story. If you haven’t watched it, I highly recommend it. It has its issues — like Darren Criss, a white man, playing a mixed-race man and the title is very misleading — but that’s for a review of the show, not this book.

It’s damned exhaustive. It’s over 500 pages. And, it’s very broad. It covers the killing spree of Andrew Cunanan, not the assassination of Gianni Versace. Versace’s death came at the end of Andrew’s spree and it was the last few chapters of the book. It also is very difficult because Cunanan killed himself, so anything about motive or what people say about him and his life cannot be fact-checked. It’s also dated when talking about the gay scene in the late-90s, however, I didn’t find it insulting and it was as sensitive as it was.

I think that this book is very misleading, though. It’s about Andrew Cunanan. That’s what it is. You learn about his victims; Jeff Trail, David Madson, Lee Miglin, William Reese, and Gianni Versace. However, the book is all about Cunanan. He’s the star of the show.

So, I did enjoy this book. It was interesting to read. However, I wouldn’t read it again. I will rewatch the show, though, until the day I die.

Have you read this or watched the show?
Do you have a favorite little-known serial killer?

I present to you, the stack of books I read for the #mdwreadathon hosted by @spacetoread and @agoodeastegg! 📚 I read a grand total of 10 books! A few aren't pictured because I read them digitally. But my list is: • Neverwhere • How the Marquis Got His Coat Back (in the back of Neverwhere) • A Single Man • The Cheapest Nights (e-ARC) • The Girls Weekend (e-ARC) • This Spell Can't Last (digital only) • These Witches Don't Burn • The Black Prince • Maurice • This Coven Won't Break 📚 I'm very pleased with this total! Definitely hoping that another readathon like this gets hosted soon. 📚 #bookstack #bookstagrammer #bookstagram #readathon #yafiction #yafantasy #fantasy #classics #historicalnonfiction #finishedreading #reader #bibliophile
What genre have you branched out to read? 📚 Over the past couple years, I branched out of my comfort zone. Contemporary has never exactly been my kind of read, but I found Courtney Summers. I need to read more by her! I'm already so hyped for The Project and I THINK I'm finally brave enough to try All the Rage. 📚 There are lots of contemporary books I've enjoyed as well, and I'll have to feature them at some point, but Courtney Summers is one author! 📚 #bookstagram #bookstagrammer #bookstack #courtneysummers #crackeduptobe #sadie #theproject #wednesdaybooks #yacontemporary #contemporaryfiction
Have you ever picked up a book because of a movie? 🎟️ That's the case with this book! A few weeks ago I watched The Limehouse Golem on Hulu and loved it. When I did some Googling on it, I found out it's based on a book, Dan Leno and the Limehouse Golem. I found it for a good price online and got it! 🎟️ Then, this morning, I woke up to an email that I have an e-book ready for me, The Dumas Club. I rewatched The Ninth Gate (a fantastic Johnny Depp film) a bit ago and when I was Googling about it, I found out it was inspired by that book. 🎟️ I'm really looking forward to picking both up when I get the chance! 🎟️ #bookstagrammer #bookstagram #tbr #thelimehousegolem #danlenoandthelimehousegolem #theninthgate #thedumasclub #horror #historicalfiction
This weekend, while I do the #mdwreadathon I'm burning this candle! It smells soooo good. Like, I love it. I've been holding off on burning it because I knew I'd burn it so fast. Whoops! 🕯️ Besides that, I am reading. I haven't picked up any other book but The Black Prince yet. I'm also hoping to finish Neverwhere and A Single Man today because I don't have much left in them! 🕯️ What is your favorite candle to burn or melt while reading?? 🕯️ #bookstagrammer #bookstagram #amreading #getfictional #getfictionalcandles #werewolf #wolfsbane #werewolves
It's time for #wineandcurrentlyreading paired with my #mdwreadathon TBR!! 🍾 Now, why the cheap champagne, you might ask? Because, in addition to these great tags, I am officially a licensed social worker! Only in Kansas, but the exam has been taken and I passed! 🍾 My TBR for this long, Memorial Day weekend has four physical books and two e-ARCs. I'm super excited to join and I love that @agoodeastegg and @spacetoread are hosting! 🍾 • Neverwhere • The Black Prince • A Single Man • These Witches Don't Burn • The Girls Weekend • The Cheapest Nights 🍾 Tell me some of your good news! 🍾 #bookstack #bookstagrammer #bookstagram #amreading #mdwreadathontbr #tbrpile #boozybibliophiles #socialworkersofinstagram #socialworker
Another review! 3.5/5⭐ 💀 CW: rape (stranger and marital), intimate partner violence, physical assault, murder, miscarriage from abuse, and racist and homophobic remarks 💀 The more I read by King, the more I see the connections. I think I wouldn't have enjoyed this as much if I didn't see the links between this and other books, because this is a "try hard" book, as King puts it himself. It's a good book with a very interesting story -- as well as a lot of tough topics that are still important today -- but it's too long for its own good. Much like Insomnia, which I DNFed. 💀 This story follows Rose Daniels. She's the wife of Norman Daniels, one of those bad cops and an abusive man as well at home. She decides that enough is enough and leaves him. But, what really sticks to him, is that she takes money out of the ATM so she can get somewhere safer. That's what really gets him and he has to make her pay for stealing his money. 💀 She gets away and finds a women's shelter, makes friends with people who will protect her when the time comes, and starts looking into a relationship. It's a good story and I liked reading it, but it's still too long and I felt a lot of it could have been cut out to get to the meat of the story. Also, things could have been cut out with the "otherworldly" things. It reminded me of The Gunslinger, which wasn't a book I liked by him. It was just too weird and too random. 💀 Other than those things, this was a great book. Not one of King's best, but certainly not his worst.