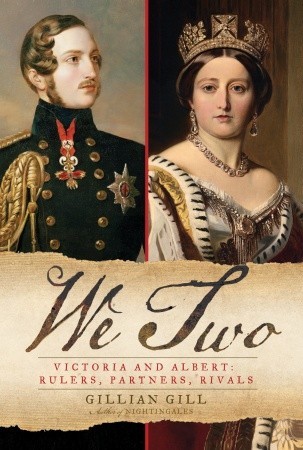 I’ll be the first person to say that I don’t like Queen Victoria. She just doesn’t interest me. However, I’ve read a couple books that have finally let me get interested in her in some way. Really, that comes from her and her relationship to her husband, Prince Albert.

To me, it’s not healthy. What they had is pretty terrifying to me.

But, they both didn’t have great upbringings. Queen Victoria definitely was an abused child and Prince Albert didn’t have the best parents out there. They married young and it wasn’t long until Victoria was having child after child for most of their marriage.

The book really focused more on Prince Albert rather than Victoria. She was important, obviously, but Gill was more interested in talking about Albert. He was the one who grabbed more and more power as they were married and she had children.

However, I never got the feeling that they were rivals. They worked together — namely, Victoria changed herself to fit whatever Albert wanted — to create a dynasty together and to emulate Victoria’s grandfather, George III with penny-pinching and frugality. They were partners with creating a certain image of the ideal English family. Both ruled in their own way.

I’m not denying that there was a rivalry between them, but more that the author didn’t show it to me well.

After reading this, I feel more ready to delve into Victoria’s reign. I have enough of a background and I finally feel interested enough to do it.

What books do you recommend about Victoria?