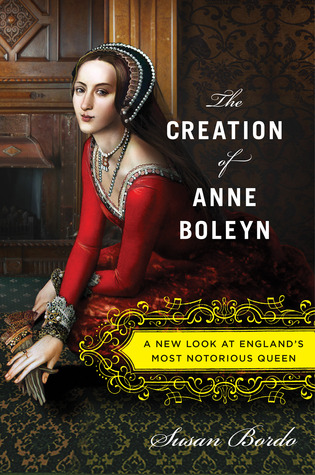 First thing I want to say is that I’m embarrassed about how long it took me to read this. I started it in September and I finished it late November. The book isn’t bad! It’s an excellent read! But, it took me forever. Thanks, grad school.

Second thing, I’m extremely biased on this subject. Ever since watching The Tudors, I’ve been in love with Anne Boleyn and I’m extremely sympathetic to everything about her. Hell, I even have her signature tattooed on my arm.

This has been on my TBR a long time. I tried reading it a while ago, wasn’t interested, then decided this is the year I finally get to it. It’s a fantastic book, too. As I said. I appreciated that Bordo was upfront about her own bias and that she has her own theories/ideas that she doesn’t keep out of the story.

What I appreciated about this book — and think that this is essential for all Tudor enthusiasts — is that she critically examines the available literature. The book starts with a general timeline of Anne’s life, going through what has been said and dispelling common myths by looking at sources and the contemporary authors. Bordo hunts out their biases and lays it bare.

Next, the book looks at Anne through the ages after her death. All the big things that were published about her and dissecting them as where they drew their inspiration from. I was definitely less interested in the earlier parts of this section since it was Victorian and about plays or movies I haven’t seen.

The shit I ate up was Bordo’s sections on The Tudors and the more modern books and movies that have come out about her. Such as, The Other Boleyn Girl and some popular authors. I think one of my favorite parts of the book was Bordo politely dragging authors without mincing her words. Her critical analysis of Philippa Gregory (my nemesis) and how she misrepresents herself, along with stating the importance of accuracy in historical fiction, breathed life into me.

Slight tangent before we get on with it, but my most popular “review” on Goodreads is for a Philippa Gregory book. I haven’t read it. I have no intention to. It’s literally me piecing apart the description of the book and how incorrect it is. (Including Michael Scott gifs.) I can’t tell you how many people have commented on it telling me to take the stick out of my ass. Not kidding there. Someone wrote that. But, accuracy is important! Sure, some people go out and start doing their own research, but people take writers at their word, especially when the author is Gregory who goes and advertises herself as being 100% accurate…. when that’s never the case.

Tangent over. Bordo also criticizes another popular, mainly nonfiction, author. Alison Weir. If y’all have been on this blog long enough, you know I’m no longer a fan of her. I once was, but I’m highly critical of her now. If you’re newer, take a second and search for her on the blog.

This book was very well-written and highly interesting. The star off is just because I feel Bordo went on tangents (like me) and wrote some about areas that aren’t as interesting. But, this is definitely one to have on your shelf to refer to if you’re like me and love Tudor history.

What do you think of Anne Boleyn? Am I the only one in love with her?
What historical figure do you have an obsession with?