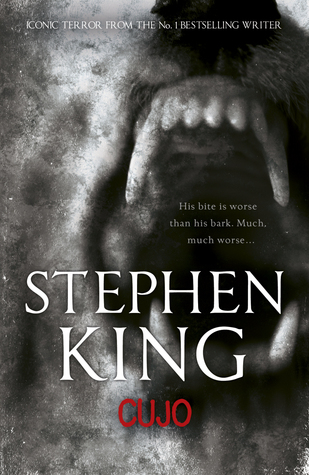 A long time ago, after reading Carrie, I decided to give this a try on audiobook. It didn’t go well. I think it was mainly because it was the heat of summer and inventory at work. Couldn’t concentrate on the story. I called this a DNF and moved on with my life.

Years later, I found a nice copy of this at a used bookstore and decided to get it. Then, a few more years went by and here we are with me actually reading it and enjoying it!

I know this book is controversial. King wrote it while he was blackout drunk and high. He doesn’t remember it, even though this is one of his classics. The book is different, too. It reminded me of Gerald’s Game in some areas, just because of the focus of a woman doing her best to survive. It also meandered a lot.

The story isn’t just about Cujo, it’s about a wife cheating on her husband and it coming out. It’s about the man she had the affair with wanting revenge. It’s about a boy (somewhat like Danny from The Shining) having some sort of supernatural ability that’s never quite explained. It’s about a violent man and a wife wanting to get out.

The story is about the town, not just the rabid dog. And that makes it a very different kind of read. Will I read it again? Probably. I really want to read his books in order one day, just to see as his universe grows and stretches as the years pass. Because I can see threads of multiple stories tying in here, which makes it interesting.

What do you think of this book? (People seem to love it or hate it.)