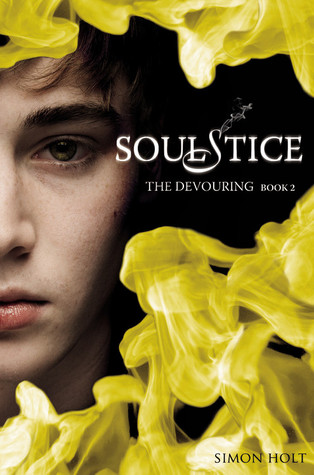 This book continues six months after the events in The Devouring and, let me tell you, it’s good but it isn’t as good.

I still love Reggie and Aaron, but the story gets a little odd. It felt like it was less about character development and getting me to care about the story — which I did in The Devouring because who doesn’t love an older sister teaching her brother to save himself? — than about hitting the next plot points so the stepping stone was in place for book three.

And, while that’s fine and dandy, it didn’t feel as well woven into the story. It felt obvious that Holt was keeping his end game in mind rather than it organically happening and making me go “Oh!” when I read the third book in the series. (Which I have read and, at the time of reading this, had no memory of.)

As I said, I enjoyed the characters and I wanted to see everything turn out okay for them, but I wasn’t impressed by these things being introduced to it. Vours hatching some plot so they can be powerful during the summer solstice, when they’re least powerful? Tracers, who kill Vours and anyone touched by Vours? This weird world the Vours live in that is a world but also isn’t?

It simply made me go “huh” and want it to end because I didn’t feel like it was well done.

Of course, the horror Holt gave me was thrilling, but it didn’t have the personal connection like the first book did. It felt like it was stretching thin already and it should have stopped before it petered out completely.

I know those are a lot of cons for a book I’m giving four stars, but, at the time of writing this, I just finished the third book and the negatives stand out more than the positives. I enjoyed this book and it gave me hope for the next one, but it still wasn’t as impressive.

What book series suffers hard from the “second book slump” for you?

One thought on “Book review – Soulstice by Simon Holt”