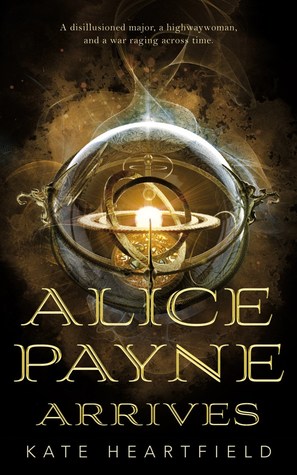 ARC provided by Tor in exchange for an honest review! This will be published November 6th!

Honestly, I’m not quite sure how to rate this book, but it was somewhere between me liking it and me finding it okay. At first I liked it, then I thought it was just okay and I didn’t find the ending as interesting as I wanted.

Alice Payne is a half black woman growing up with her white father in England in the late-1700s. She has a girlfriend who is an inventor. Also, she’s a notorious highway man called the Holy Ghost.

Then, there’s Prudence Zuniga, a woman who has been reliving the year 1888 for a decade, sent from the future to keep history on track and to make sure other meddlers don’t get involved in it.

One day, their paths intersect.

Yet… I didn’t find it that interesting? I felt like there was a fair bit of infodumping to establish the worlds. Because, first, the 1700s are steampunk. Then you have the sci-fi element of the future. And the book’s only 160 pages.

It also took away from character development. I think that Prudence’s POV could have been cut out and likely benefited the plot as a whole because I didn’t necessarily need to read her part. I thought that Alice was a far more compelling and interesting character to read about. I understood her world (even with the changes) while Prudence’s felt flung together and confusing. There was so much explaining that had to be done that I didn’t feel like Prudence got the same amount of character development.

All in all, it was a fine book, but the amount of things brought into the story took away from the actual plot. I wanted to like it more than I did because I really want to read more sci-fi and I’ve never actually read anything steampunk before.

Do you have a favorite steampunk book?