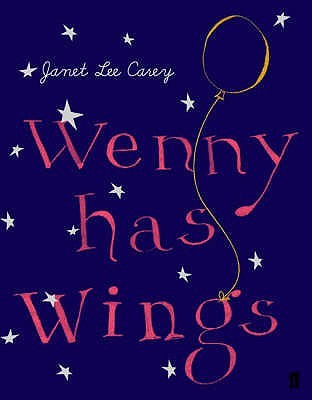 This is a hard book to review because I don’t want to say too much but it’s so hard not to. When my mom saw me reading this she said, “Oh wow! You loved that book as a kid!”

And then I realized how weird of a kid I was.

The whole premise of this book is that Will and Wenny were walking to a craft store, but while crossing the street they were hit by a car. Wenny died. Will died, too, but then he came back after having a near-death experience, seeing his sister flying ahead of him before he came back.

After he comes back, things are different. His loud little sister is gone. And he’s left with a hole in his heart, carrying a secret about what happened since he doesn’t think he can tell his family. Then, his father isn’t talking or interacting with the family. Will knows deep down that Wenny was his dad’s favorite. His mother is pregnant, too. They were expecting their third.

Deep down, this book is about a family dealing with grief. Seeing it from a child’s perspective makes it really stand out. He doesn’t understand what his parents are going through, even though he knows. He doesn’t know how to make it better but he can’t.

This book is also about a father-son relationship that’s always been tenuous. They love each other, but Will’s always felt that his father loved Wenny the most. And now there’s an even bigger wedge because Will thinks he’s the reason that he died.

Even if I rated this book four stars this time around, it’s still an excellent book with a great message about grief. As I’ve gotten older, I can see it from so many different angles. I can’t recommend this book enough.

What are your favorite childhood books?

3 thoughts on “Wenny Has Wings by Janet Lee Carey”