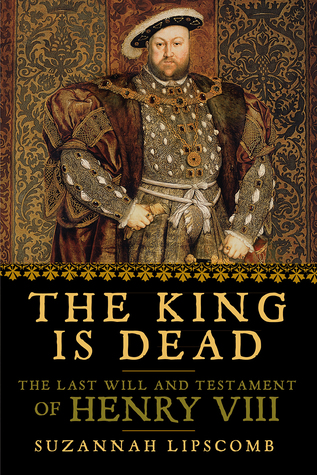 Yet again, Lipscomb takes a topic that has been decided by former historians and turns it on its head. The long thought (even agreed upon) theory is that Henry VIII’s will was not created by him, but it was created by those at court who wanted more power before Edward VI reached his majority. And she argues that he was controlling up until the end, but that afterward people took advantage.

While I definitely have my ideas on Henry, I found myself agreeing with her. She pointed out that the will itself was very orthodox Catholic, just with some changes to keep him at the head of the church. And that goes with the rest of his life. If the upstarts in court had gotten a hold of it, it would have been more evangelical.

Also, the people he took out and added as protectors of the realm during Edward VI’s minority made sense. While they were certainly more evangelical (i.e. Protestant) than Henry himself, the conservatives (i.e. Catholic) at court had tried to make a coup against them. They targeted various members of the court, including the Queen, and it upset Henry.

It was the clause he put in about how he wanted all intended gifts to be given to people. Which meant that if he slightly hinted he might give something to you, they could just take and claim it. And there were a lot of missing people from court that had never been replaced, so the people closest to Henry snatched them up.

I think the only downside to this book is that it spends so much time examining the last decade of his life, then the last year, then the last month, and finally the last days before getting to a close examination of the actual will. The book is only ten chapters long (around 100 pages when you take out the appendices, bibliography, notes on the text, and index), so it spends a lot of time setting the stage rather than weaving that into an analysis.

This is a good book. It’s informative and challenges long-held beliefs that I’ve heard time and time again. And it certainly proves a point in doing that. Just that it was a bit too long.

One thought on “The King is Dead: The Last Will and Testament of Henry VIII by Suzannah Lipscomb”