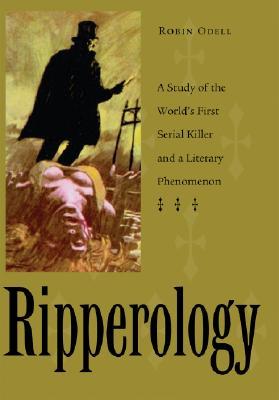 I’m going to start with this caveat first. If you have no prior knowledge on the Ripper murders, do not start here.

This book is more of a historical literary analysis of books that have been written about Jack the Ripper and who he is. Literally, there is about pages of information about the murders. This doesn’t include the suspects. Odell is an established Ripperologist and this is written for those with a serious interest in the crimes. (But, if this whets your appetite, I’d be happy to direct you to some books I personally liked and gave me a grounding!)

Luckily, I have a huge interest and knowledge base about dear old Jack.

I’ve read quite a few books, read shows, watched movies, did some tours, etc. Basically, I’ve been interested in Jack since I was nine. Yeah. I was a weird kid. But, that’s for another time.

As I said, this book is more of a historical literary analysis, following the trends through the years and Ripperologists. Odell had more to say about people from the 1960s and on, but this book cuts off in the early 2000s so new evidence that has come to light wasn’t included.

I loved how thorough Odell was. He covered serious theories that I’ve heard many times, ones that are serious but I haven’t heard of too much because books I’ve read dismissed them, and the crack pot theories that I love. Such as, the Duke of Clarence (Queen Victoria’s grandson) was the cause of it — and the basis of From Hell, both graphic novel and movie — and that it wasn’t Jack the Ripper but Jill the Ripper.

Odell went through it all, combing the evidence that was available to him and all the books that made a mark on history. For good and for bad, too. He treats it all evenly, which I really like. While Odell is dismissive of the more ridiculous theories, he still examines all the evidence and then shows how it doesn’t quite work.

The only downside is that this doesn’t account for some recent advancements. Mainly, I’m referring to the book Naming Jack the Ripper. I read this back in 2016 and was impressed by it because it brought in DNA evidence that linked one of the prime suspects to the history. I would have loved to see Odell’s thoughts on it since it sounds like Cornwell’s book, Portrait of a Killer, which he examines in lots of detail. Aka, he tears it down.

While this book is for a very specialized group of people, it was very interesting. You just have to know your stuff already and have read some of the literature. Unless you want to do a bunch of Googling while reading.

7 thoughts on “Ripperology: A Study Of The World’s First Serial Killer And A Literary Phenomenon by Robin Odell”