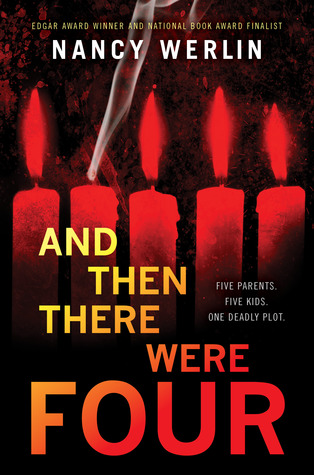 But, I have to put a longer review. Mainly because this was supposed to be a buddy read with Emma. Too bad this book sucked.

I wish I was joking. Emma gave me three choices. Illuminae (a book I DNFed… but might try again one day), The Call, and this one. I thought this one would be the best because 1) I’ve read a few of Werlin’s books and enjoyed them, and 2) I love the book she stole the title from.

The characters were just bad. Sure, they ticked diversity boxes — a gay character, a POC character, a disabled character, mental illness rep, etc — but they were written so badly that I couldn’t do it.

This book had two POVs, Caleb and Saralinda. Caleb is the mental illness rep and Saralinda is the disability rep. But Saralinda is written so badly that I wanted to die. Sure, the way she talks (aka how she’s written) shows how sheltered she’s been, but that doesn’t mean I have to like it. She’s a childish character and it was unbelievable that she was supposed to be that age.

Caleb, I could stomach more. Until they started using DID (Dissociative Identity Disorder; formerly Multiple Personality Disorder) as a fun and interesting way to make a twist. And also play on the stereotypes of the disorder.

And then the plot is just a knock-off. I mean, if you’ve read And Then There Were None then you know it. Kind of. This one has five kids and, from what I read, one “murder” that I’d call accidental death at the moment since I didn’t get past it. Yes, over 30% and there was only one murder. Fucking lame.

And I was pretty sure the rest was them speculating about their parents and other odd things happening. Aka, no extra murders. That’s so lame. How dare Werlin take Agatha Christie’s name like this?

This was a lame book. It was badly edited because it was ten times too long. There were whole chapters that added nothing to the story that could have been edited out. I expected more of this book and I’m disappointed by it.

2 thoughts on “And Then There Were Four by Nancy Werlin”

Meet the bookstagrammer! 📚 I was already planning on doing one of these today, but Tonya @agoodeastegg tagged me in a current read selfie. So, those are the physical books I'm reading! I'm not tagging anyone because I'm lazy. 🤣 📚 In other news.... IT'S MY BIRTHDAY! I'm 24 today and, by far, this is the weirdest birthday I've had. I'm just going to be hanging out at home with my parents, binging The Outsider. 📚 Some facts about me: • I'm a Slytherin. • I love history. It's so fascinating to me. • Wine is my favorite thing to drink while reading. • I'm nearly done getting my master's in social work. This time next year, I'll be licensed and in the field! 📚 So, that's about me. I'll be off and on here because I'm planning on getting lots of reading done while I watch TV. 📚 #currentreadselfie #meetthebookstagrammer #bookstack #bookstagrammer #bookstagram #amreading #reader #bibliophile
Happy April! Tbh, I'm not having a great start. 🤣 My dad and I are installing a new sink. After seven hours yesterday, we still aren't done. Then the spring to our garage door broke. Ah, life. 📚 In addition to the books in reading for the OWLs Readathon, I'm also going to fit these in! I'm very excited to get started and unplug for the day because I need some rest! 📚 What are you most excited to read this month? 📚 #apriltbr #apriltbrpile #tbrcart #tbr #bookstagrammer #bookstagram #bibliophile #reader
This is part of my April TBR! I've decided to take part in the O.W.L.s magical readathon for Slytherin! 🦉 I've never taken part in it, so first time for everything. I'm going for Mind Medic with trainings in merpeople linguistics and animagi. My TBR is as follows: 🦉 🌹Ancient Runes: heart on the cover or title; Every Heart a Doorway 🌹Arithmancy: read something outside your favorite genre; Something to Talk About (e-ARC) 🌹Charms: white cover; The Spirit Catches You and You Fall Down 🌹DADA: book set at sea or the coast; The Vanishing Deep 🌹 Herbology: title starts with an M; Medieval Islam 🌹Muggle Studies: contemporary; Felix Ever After (e-ARC) 🌹 Potions: under 150 pages; The Ghosts of Sherwood 🌹 Transfiguration: includes shapeshifting; Shiver (e-copy) 🦉 That's my TBR! I'm sure I can get through it and count my readings towards a Slytherin win! 🦉 #owlsmagicalreadathon2020 #owlsreadathon2020 #bookstack #bookstagrammer #bookstagram #tbrpile #tbr
Being at home all the time means picking up a gigantic (around 800 pages) biography about a medieval king. I don't make the rules, I just follow them. 👑 In other news, I also have five ARCs to read before April and have also decided to reread Harry Potter for the hell of it. My schedule is, literally, booked. 👑 How are all of you holding up this weekend?? 👑 #amreading #bookstagrammer #bookstagram #edwardiii #plantagenet #monarchy #britishmonarchy #bibliophile #historicalnonfiction #historynerd
It's another review! 4/5 ⭐⭐ 🕯️ What a satisfying ending to this series. 🕯️ Were there historical inaccuracies and liberties taken? Sure. Jane Rochford likely wasn't how she was portrayed in this series and there were things that never happened that were included in this. Cromwell also never for sure had an illegitimate child although Mantel talks about rumors that he did have one around the time his family died. 🕯️ But I found this to be a very satisfying conclusion to this series. I loved reading it and how soothing it was to sink into, even though I knew the conclusion that we were going towards. Cromwell's inevitable demise. I honestly found the last couple chapters so poetic. And that last chapter with the execution? Amazing. It brought tears to my eyes. 🕯️ All I can say was that there were pros and cons to this novel, but I, overall, found it completely worth it and can't wait to read the books altogether to see the whole character arc without gaps in between. 🕯️ #bibliophile #thomascromwell #themirrorandthelight #wolfhall #bringupthebodies #bookreview #review #bookstagrammer #bookstagram #tudordynasty
Hey, a review!! 4.5/5⭐⭐ 🌹 Y'all, this was fucking good. That's basically the heart of this review. I read the first chapter of this and knew immediately that I had to own it. By page 60, I had placed an order for it and received it. It was just amazing. 🌹 It's a hard book to read, as you can likely see from my list of content warnings (see comments). This book talks about child sex abuse and it's a story of how a woman looks back and tries re-narrating her sexual experiences with her teacher. It was hard for me to read at times because I could see it. I'm an adult and I've had lots of training on child sex abuse, including the typical stages and what it looks like and what people say to the kids. But, it was so fucking good. 🌹 I loved how it was told and how it just took you through Vanessa's life while she was trying to come to terms with what's happening in the present. It's such an amazing book and I really can't wait to see what Russell does with her next book. I can't believe the talent in this debut and that King's blurb didn't lie to me. 🌹 #bookreview #review #bookstagrammer #bookstagram #bookreviewer #mydarkvanessa #kateelizabethrussell #bibliophile