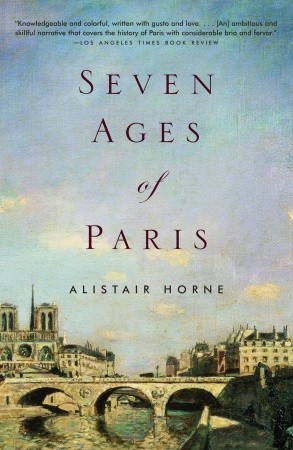 For me, this book was a great big ball of meh. I got it from a bookstore because I thought it sounded fascinating. A historian telling me what he thinks the seven ages of Paris were and what happened during those ages? Fascinating! A social history, in a way, all focused on certain ages he noticed through his years of study.

That wasn’t this book. If anyone knows of a book like that, please hit me up. I think another reviewer said it best: This book is an aging British scholar’s love letter to Paris – and it read that way. He focused on the rulers and the politics of their reign, not the experiences of the people in Paris. Instead of a social history, it was a political history. And that made it super boring since it focused more on the various rulers rather than what the people felt.

I found it pretty boring and watered down by the opinions of an aged historian. Such as, he loved assuming the sexuality of various rulers. And he’s using a definition of homosexuality that was created in the 1800s and applying it to people who were around centuries before it was created. So, that’s a bad thing to do as a historian. You don’t apply modern terms to historical people. As an example, I wouldn’t call Joan of Arc transgender because that term wasn’t a thing back then, even though she shows some signs of it. That’s not the best example, but it’s one I could come up with. You just don’t do that as a historian. And he labeled multiple people as “homosexual” when they had relationships with women and some of them actually had kids. Yeah. He called them homosexual when they were, at best, bisexual.

Then, he had a bias against Marie Antoinette and he made so many other snide comments that I became exasperated. Great, he has an opinion, but they’re not backed up by history. And it felt like this was, as the reviewer before me put it, a love letter to Paris. It was terribly boring. Especially since Paris isn’t my favorite city in the world.

In short, I wouldn’t recommend this book. It’s readable and somewhat interesting at times, but it wasn’t what I was looking for. I should have read some reviews before I went and bought this one, but I’m glad it’s off my TBR.

One thought on “Seven Ages of Paris by Alistair Horne”