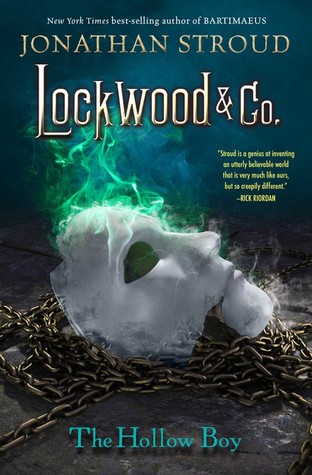 I think I can sum up this book with one word: Disappointing. This was a book in the series I didn’t remember much of whatsoever. The case wasn’t a stand-out compared to the others, and I mainly remembered the things that I took an issue with. Really, this is the weakest book thus far in the series.

Most of the plot lies with the relationship between Holly and Lucy. The general plot goes like this: Lucy goes on holiday and Lockwood and George hire Holly without her permission. Basically, Holly is the perfect example of traditional female stereotypes. Really pretty, wears nice clothing, eats healthy stuff to watch her weight, always is organizing and cleaning up. In other words, everything that Lucy isn’t. And there’s an immediate dislike between the characters that’s churned up more by Lucy thinking that Lockwood has a crush on her and that Holly wants it.

This book has a plot based completely on angst and women-on-women hate, which isn’t the way the world works. Just because two women live and work in the same profession, it doesn’t mean a cat fight’s brewing. It hit me hard that this is written by a man in this book when, so far, everything had been handled very well and even called out sexism in the society they live in. It reduced strong characters to being man crazy, really. Lucy isn’t my favorite character — in fact, she reminds me of Lila from A Darker Shade of Magic, aka the bane of my existence — yet she’s still strong and funny. This book severely brings her down from a BA with the best Listening ability in decades to only caring about whether a boy likes her or not. On a different thread, Holly could have seriously been great. Imagine, a “tomboy” like Lucy working with someone who’s super girly and getting shit done while showing up the guys. What’s wrong with a girl wanting to do “girly” things? Nothing.

It’s even worse when the case/mystery is super weak and the only thing holding it together is Holly and Lucy hating each other. The plot twist could have been gotten another way. And, let’s spend a second on the twist. I raved about it in my initial review. Yet, on this reread, it was bland and predictable. I could see it coming a mile away with hindsight. And, then there’s the twist itself. Of course it’s focused on a boy.

While I’ve just ranted about this, I still found it funny and fun to read, even though I spent most of my status updates shitting on the stuff it did. It is a weak book in the series with an annoying YA style angsty plot. It really could have been better and I hope that book four is better.

3 thoughts on “The Hollow Boy by Jonathan Stroud”