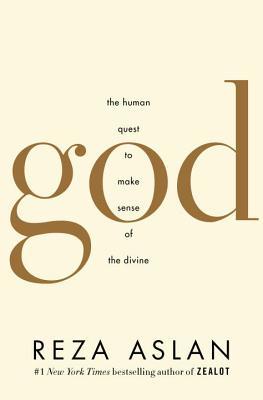 Thanks to Netgalley and Random House for an advanced copy! All opinions here are my own and are not influenced by them.

Admittedly, I do love Reza Aslan, though. I’ve read two of his books and one of them completely changed my viewpoint on things. My religious studies professors sometimes talk about him to bring up various issues since he’s a well-known guy who studies religions and talks about them. Not only that, but I’ve often wondered how/why we decided to make such inventive religions and their function.

The approach Aslan takes basically covers history from prehistory to, give or take, 1000 CE. He starts with what various possible prehistorical religions, or what we may know of them. Then, polytheism and onto failed attempts of monotheism. Judaism, then Christianity, and finally Islam. Not only that, but Aslan also brings in more than religion. Psychology gets brought up quite often, and actually, a few things that I’ve studied on my own for various papers. Anthropology also is brought in, as is sociology.

I was convinced up until the conclusion that this would get 4.5-5 stars. However, the conclusion got too preachy for me. Aslan, in a way, said how people should believe in God or what to believe. While I was raised in what he described and it’s present in most religions, as he pointed out,  I wasn’t a fan of how it was presented. Hopefully, before it gets published, it’s changed to a suggestion for how to approach religion since it’s a very personal thing.

2 thoughts on “God: The Human Quest to Make Sense fo the Divine by Reza Aslan”