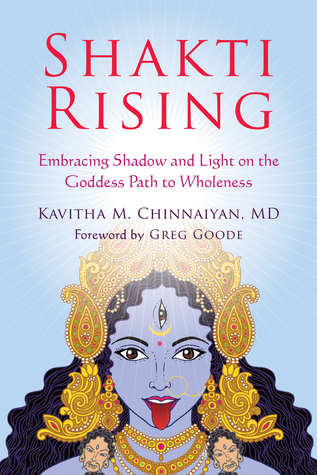 Thank you to Netgalley for giving me this ARC in exchange for an honest review!

I had a super weird upbringing, to be quite honest. That’s what leads me here. The “religion” I was brought up in was a mix of Christianity, Buddhism, and so many others that I can’t name them. But, Christianity and Buddhism were the biggest pieces of it. Currently, I align closer to Hinduism. However, I have many hints of other religions coursing through me. Every single religion I’ve encountered, I seem to find something I like. Mainly, I requested this book for Kali since I had a huge feeling she was going to be featured in this.

The basic structure of this book is first the goddess is introduced, from her looks to her relationship with Shiva to anything else. Then, her “shadow” is introduced and how she keeps you from being enlightened. Third, her “light” is shown and how it brings you closer to enlightenment. Finally, you get some exercises that you can follow to help you get closer to the goddess.

It’s a pretty straightforward book once you get used to the topic. It’s easy to follow as well, so long as you can wrap your head around things.

Even for me, it was super dense. There were tons of terms thrown at you with a definition given the first time, then nothing else after that. I’d forget the definitions and would stare wide-eyed at the terms before going on and pretending I understood them. Some added reminders would have been helpful for me. Also, this book is centered on the philosophical side of Hinduism and definitely Buddhism. I found more Buddhism in it than Hinduism, honestly. This isn’t a book you can just jump into. It takes time.

I wish I had more time to read this since it wasn’t an easy book. This is one that I want to own a physical copy of just so I can mark it the hell up and use it in my personal life. I wouldn’t recommend it to anyone who is looking for a first glimpse into Hinduism or doesn’t have a personal interest in it.

One thought on “Shakti Rising: Embracing Shadow and Light on the Goddess Path to Wholeness by Kavitha M. Chinnaiyan”