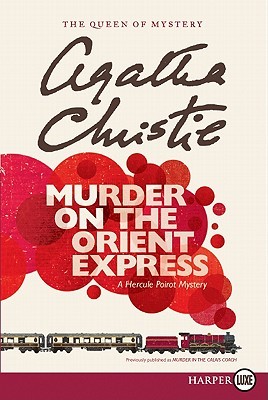 So, this is my third time reading this. Don’t expect a huge analysis or anything. Plus, doing that would just give away the fun of the mystery, you know?

I love Poirot. I think that he’s the best character Agatha Christie wrote and I will fight you on it. I’ve seen every single episode of Poirot (and am super pissed about Netflix taking off the first, like, eight seasons). I’ve read some of the books/short stories. This reread was for myself, not for the movie. At this moment, I’m really unsure whether I’ll go and see the movie. I saw it was coming out and decided it was time for a reread.

The mystery is brilliant. Again, probably one of the best that Christie wrote. The first time I read it, I remember being really stumped about it since there were so many suspects but none of the clues matched up to my prototypical murder. This being my third time, the story is literally peppered with clues and there’s great foreshadowing. Not only that, but if you listen to the audiobook version like I did, the reader is fantastic with all the different characters.

The characters themselves were all super distinct. There are over 12 of them and I never once got them mixed up for one another. I think that’s a good mark for the reader since even when I reread stuff, I can get people mixed up in my head.

It’s seriously a great book. Even if you’re not that into mysteries, I’d suggest you read it since Christie is out of this world. And it makes me want to read all of her Poirot series (including ones I’ve already read) instead of doing productive things, like read books I haven’t read.

2 thoughts on “Murder on the Orient Express by Agatha Christie”