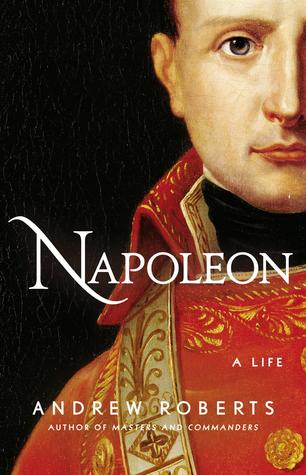 If there was a gif that summed me up with this book, it would be this:

Basically, I literally know nothing about Napoleon. For most of the book, I legitimately thought that Napoleon was a part of the original Revolutionary government and then he weaved through to the top or was at the top for a while. That’s why I was always super confused when I read about Marie Antoinette and why they never mentioned Napoleon. All because I never really looked into post-revolutionary topics since I just like dear Marie.

This book, alas, is not for a noob such as myself. It’s about 1000 pages long and I listened to it. If I had been reading it, I may have given up and shelved it under a book I’m pausing for whatever reason. There were just so many names, some were important and some weren’t. It covered basically everything about Napoleon. I would have been much happier with a book only about his childhood or rising through the ranks or his downfall or his marriages and affairs. It came down to me literally knowing no names and having to try to get everything down.

My caveat is that this book is well-written. It truly is, and Roberts tackles this huge topic very well. Even though I had no clue who some people were, I could keep track of most things and make some connections to an earlier part of the book. The biggest thing was that this book challenged my view of Napoleon. I’ve always heard of him as a horrible man and no one really liked him, but, really, he seemed pretty decent and respected people no matter what rank they were. Sure, I don’t agree with his land grabs, but he wasn’t some demon antichrist I’ve heard for most of my life.

While I wouldn’t recommend this book for a beginner, I do think it’s something valuable that people who actually have background knowledge to read or have in their collection of books about him.

2 thoughts on “Napoleon: A Life by Andrew Roberts”