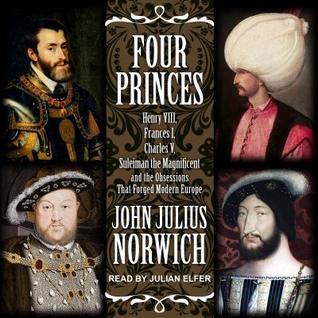 As most of you guys know by now (if you follow my reviews, that is), I have a thing for Tudor England. Most of my knowledge is based around Henry VIII. I’m going to abbreviate most of the king’s names, so Henry is going to be known as H8 for this review. What I know of Francis I (F1) and Charles V (C5) is all based around H8. Like, I know things and how they’re related to England, but not their own kingdoms. I actually had no idea who Suleiman was.

What I liked about this book was that it was a super compact overview of four men who held great sway in the world. As Norwich said, it was the last time that’s ever really happened. It was a Greatest Hits CD for the four of them. It was also well-written, making it easy to understand when it could have been very dense. Norwich made this book read for anyone.

However, a lot of what I had issues with came to be the liberties and misinterpretations Norwich took that coincided with what I thought was good. I have quite a few examples that I jotted down in my outline of this review. He made it seem as if Katherine of Aragon (H8’s first wife) had a stillborn son because she rode on a horse to oversee an army. He fell into the trap of C5’s mom, Juana, was insane when that probably wasn’t the case. Anne Boleyn (H8’s second wife), apparently, lost H8’s love in 1534 and that’s also when Jane Seymour (wife three) came onto the scene. Pretty sure that’s not completely accurate. Jane and Katheryn Parr (H8’s sixth wife) also were the only “good” wives he had. Anne Boleyn also apparently possibly could have committed adultery due to her personality when she was an extremely pious woman.

All that I’m trying to say with that long paragraph is that he’s inaccurate with his recounting. That, for me, throws into question everything with F1, C5, and Suleiman. He lost credibility for me.

For all this book is, it’s good for what it is: A compact overview that takes simple explanations.

One thought on “Four Princes: Henry VIII, Francis I, Charles V, Suleiman the Magnificent and the Obsessions That Forged Modern Europe by John Julius Norwich”