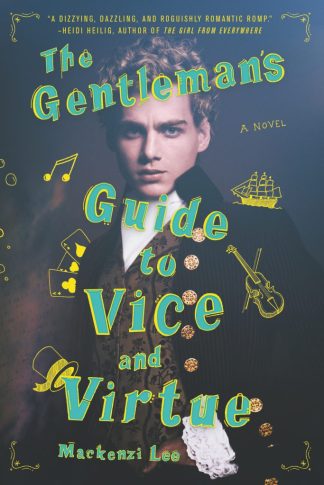 Caidyn also read Gentleman’s Guide this month and already reviewed it. If you want his opinion on the book, here it is: Caidyn’s Review.

“It occurs to me suddenly, as I look down the deck to where Percy’s sitting with his fiddle and two of the men, who are singing a tune for him in hopes he can pick up the melody, that this must be the first time in his life he’s around men who look like him. Men who don’t assume he’s worth less than them just because of the color of his skin. Among the pirates, he has nothing to prove.” (406)

4/5 – It’s rare that I read a book that’s recently come out. I’ve been burned before when it came to books that were hyped. However, I’m glad I didn’t wait to read this. It wasn’t the book I thought it would be, but sometimes that’s perfectly fine. There were some things that were unexpected, some things were predictable, and at the core of it were these two boys who wouldn’t tell each other how they feel.

Let’s just get this out of the way, I’m not a huge fan of angst at all. I found the angst in this book annoying. Especially because it was clear they had feelings for each other, but it wasn’t clear to them. This just isn’t a trope I’m fond of. It went on for so long and it got tired quick. Without it, I might have rated it higher. That being said, this book features an openly bisexual male, and his best friend/love interest Percy is black. That’s a lot more than most YA books have and I love that about this book.

Also, I absolutely adored Percy, he was my favorite character throughout the book. He was just so precious and adorable. It was a relief to see that they didn’t shy away from the prejudice he would’ve faced in that time because of his skin color.

Monty was complex and I still don’t have my feelings on him sorted out. I think I like him, ultimately, but I didn’t like him at first. His lack of self-awareness really bothered me and he made several decisions that were very selfish. However, there is far more under the surface when it comes to Monty and he has a nice character arc and ends the book being a character I like. His love for Percy was his one redeeming quality, but again it took a while for that to amount to anything. In the end, all his decisions were true to his character and his growth throughout didn’t feel unnatural or forced in any way. It felt realistic.

Felicity, by comparison, was a lot of fun. A determined, smart woman in the 18th century who didn’t take Monty’s shit. Sign me up! She provided a lot of humor and a nice relief from the angst. If she hadn’t been there this book would’ve been harder to deal with. I cannot wait to read the next book which I believe is from her point of view. Not to mention, I’ve heard murmurings that she’s asexual and I’m absolutely down for that if it’s true.

The plot of the book takes quite a few twists and turns and there was a lot I didn’t expect out of it. While I wasn’t a huge fan of the plot, it was the reason a lot of the things I did like occurred. Plus, the adventure starts with Monty doing something incredibly stupid, which was in character for him at that point in the book. It was a fun, quirky adventure which I wasn’t expecting. Let’s just say it wasn’t one’s typical Grand Tour.

Overall, I didn’t love this book, but I think it’s a great addition to the collection of LGBTQ+ books out there. I’m not surprised this book is popular because it’s a lot of fun and I thought the representation was fantastic. It’s also hilarious. If we have more books like this, I’ll be happy to keep reading them.