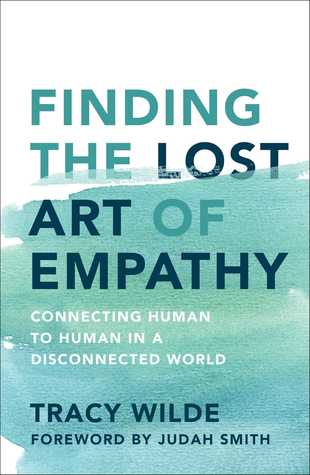 I got this book from my library on impulse. It sounds interesting and it’s sort of framed like a self-help book from the title. I’m all for empathy, too. I could care less about sympathy, although it has its places, but empathy is where it’s at. For those you don’t know, empathy is the whole “walk a mile in someone else’s shoes”. It can either be feeling that emotion with them (affective empathy) or you can identify what they feel without joining in (cognitive empathy).

However, let me tell you this. Because this was my biggest problem with the book. They did not advertise it for what this book is. They don’t put anywhere that this is a Christian book. I had to read the description on Goodreads to find out that this is written by a pastor. I don’t have a problem with books targeted specifically for Christians. What I have a problem with is not saying that it is. Because it assumes that everyone reading this is a Christian and believes in God and Jesus and all of that. Hell, even my Catholic university doesn’t do that. Most of the population is Catholic or at least Christian, but they don’t assume everyone is.

If you aren’t Christian or don’t believe in the Bible, this book will not help you. Everything she frames is all put around Jesus’ works. Now, I believe that Jesus was a great person and that he was revolutionary with his teachings when you look at ancient Judaic practices. I love Jesus, quite honestly. However, I don’t believe that he was specifically the Son of God or that he’s our savior or anything like that.

But, Wilde kept going on and on about him saving us through empathy and his last moments were full of empathy and all of that. It’s very Christian when she could have left that out. She also could have brought in other religious viewpoints or pointed out the similarities in religions. She didn’t. And without putting on the cover or in the subtitle, you wouldn’t know that it’s Christian unless you read it like I did and suddenly discover a whole lot of God being talked about.

It also felt very aimed towards women since all of her examples were focused on women as if men don’t need help with empathy and connecting. Again, it’s leaving out a huge target base. I don’t think that was purposeful, but it annoyed me even more.

There are some good take away points from this book, but it was marred by theological talk since she assumed a Christian audience that she was comfortable with.