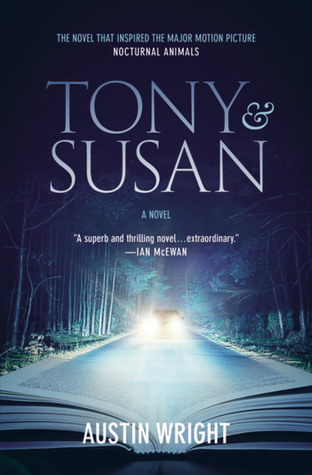 Usually, I don’t review books that I don’t get at least 15% into. If I put them on my currently reading shelf, I’ll quietly take it off. The only time I rate or review is when I have a severe problem with something about the book. And, the thing is, the problem I have with this book isn’t that severe.

I saw the movie first. When I watched the Oscar’s and saw the clips they used for Nocturnal Animals, I had to watch it. I’m a bit of a glutton for horror. What impressed me most about the movie was how quiet it was and how it kept my attention the whole time. There was an undercurrent of tension the whole time where I wanted to know what would happen. How would things be resolved? Yet, nothing happened at the same time. Things didn’t change or happen and, in the end, it was a decent movie with a great director who knew how to spin a tale.

So, I decided to read the book the movie was based on.

It’s told from two very different perspectives. Susan gets a manuscript from her ex-husband, Edward. He wants her to read it before he has it published. Then, the other point of view is that of Tony, the father in the story Susan’s reading.

Let’s just say, if you like The Road, you’ll probably like this. Sadly, I didn’t like that book. I found it boring and I hated the writing style to it. There was no connection to the characters. That’s how I felt with this book. Not only does Wright just not use commas, quotations, etc when he writes in Susan’s perspective, but he doesn’t explain anything. Who’s Martha? Oh, a chapter later you find out that she’s a cat. Who’s Henry and Dorothy? Maybe her kids? I don’t know still. Names are thrown out, concepts thrown out, without being fully explored. You get the sense that Susan’s unhappy with her life and thinks her second husband could be cheating on her, but it’s never followed up.

I found Tony’s story, both in the book and the movie, far more compelling. (The movie also used the same actor for Tony and Edward, which was a great choice.) However, having seen the movie and realizing how close the book stuck to the movie, I knew it wasn’t going to end with me happy.

In the end, I was left feeling completely disconnected from a story that, given the subject matter I know it tackles, should have drawn me in. At least with the movie there was music and great acting to bring it to life.