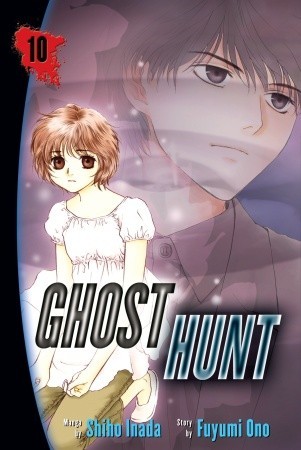 Right as I started writing this review, something outside my window creaked and I jumped. Pretty fitting for my reactions throughout this book. Usually, I don’t get scared when I read these — creeped out, sure, but not scared — since I’ve seen the anime. That will scare me, but it doesn’t translate to the manga. The volumes don’t always pack the same visual punch.

For some reason, the creators stopped at volume nine in the show. I came into this completely blind, meaning that I got downright scared. (Also listening to Spooky Symphony on Pandora didn’t help one bit.) Right from the start, it felt like some sort of swan song for the series. The last go. The last push. The last time to scare the pants of little ole Caidyn.

It picks up directly after the ending of volume 9, going in a direction that I wasn’t aware of. This volume is rather full of finding out more about Naru’s personal life — something I hope continues into the last two volumes — and uncovering some things about the group in general.

Even more surprising than it scaring me, Mai didn’t annoy me as much as she has from the first volume. Naru also wasn’t the same. He actually showed emotion, and for those who know Naru, him showing emotion is a big deal. Side characters were great as always. You find out things about them, little discoveries that were hinted at from the start. They’re all lying in some way.

The plot in this book is much like the first case, or volume one. They’re back in an abandoned school with the whole truth unknown. Instead, this time, things are being hidden from them, not that no one knows the truth. The whole truth isn’t being told. Rumors are all around them in the town. And, to top it all off, the school is pretty creepy.

Based on the sudden quality improvement, I’m really excited to read volume 11 just to see if the momentum started in this carries on into the conclusion to this case and the series as a whole.