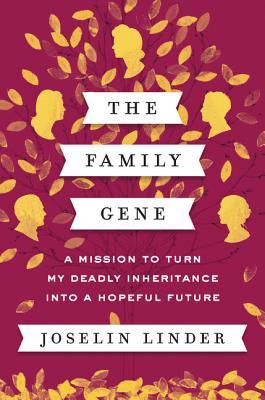 This book took me a long time to listen to because it was interrupted by my finals. No work means no listening to books. Even though it was good, I couldn’t listen to it on my free time thanks to being a responsible college student and doing this dreadful thing called “studying”. Warn your kids about it. It can get pretty terrifying.

As I said, this was a good book. It was fun and I really enjoyed how it was read. Just very upbeat and light most of the time. When this book focuses on a family illness that is currently untreatable and has killed everyone who has it — the author’s father, uncle, and other people — that’s really impressive. It’s a very light book. It’s fun to read or listen to because it simply flows so well.

Starting in the 90s, this book chronicles a family illness. It begins with Joselin’s father, a doctor who gets ill. Very ill. I think ill is an understatement to it. Then, as he gets worse, then it comes out that other people in his family had the same symptoms that he does. They also died of this mystery disease. They don’t know what it is, but know that everyone who has had it has a heart murmur, testing people in the family for it.

At times, it was heavy with technical terms, but Joselin explained them perfectly. (I’ve taken enough classes and read enough books to know most of the terms.) She just told it what it is in non-doctor speak. It’s accessible to anyone, really. All you have to know is the basics and anything beyond it, she explains. Hell, even the basics get explained.

It largely focuses on Joselin’s experiences. She’s not a doctor, after all. She’s a woman who watched various members of her family get sick and die. It’s focused on her experience of this and the stages of grief that she went through. While I’m not sure I would have liked Joselin as a person for a good part of the story, I could appreciate it. She reacted in a way people only can. Still, hearing about her healing process didn’t quite interest me as much as hearing the journey of discovery about their disorder.

All in all, a good book that had very minor flaws for me.