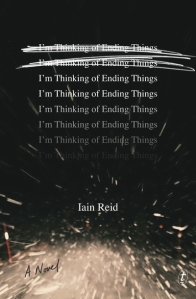 I honestly don’t know what I want to say about this book. I don’t even know how I feel about this book. It’s odd because it’s not as if I disliked it. I thought it was very interesting and intriguing and it kept me going from start to finish. Sure, I guessed the ending very early on. Yet there’s just so much more to this book. It’s one of those thrillers that’s not really a thriller. It’s not even a slow burn. Reid almost writes it as if you should know what happens in the end, however, the way that it’s written is that you honestly will want to go back and reread it from start to finish. It’s cleverly written. Who even wrote the book? Who is the narrator? Is it who we think it is or is it someone else? And the ending completely fucks with you, at least it fucked with me.

I didn’t like it, but I didn’t dislike it. I’m in an odd moot point where I’m at a loss for how I exactly feel. The whole book, I felt abstracted and dissociated from the characters. It was as if I was dissociating from the book as I read it, floating above the scene and pages. There was no real emotional pull, yet I wanted to find out what happened next. Yet, I knew the ending. It wasn’t difficult to guess.

The more I talk about it (or type about it, really) the less I feel that I understand the book as a whole. This has to be the cleverest book I’ve read in a long time, at least in the mystery department. This is a very odd little book, and I’m sticking with three stars for right now. Although I may bump it up as I think about it more.

The same day I read this, I decided to reread it. And, I took the advice the book gives you (along with the advice of a brilliant review; Ed Lorn is the tops so you should find it). I started from the very last pages of the book and worked myself backward, chapter by chapter, to the beginning. And then, from there, I reread the first page and the last couple of chapters. I never do this with books. If I’ve read it once, I don’t feel the need to reread it right away. But with this one, I had to figure it out. I had to know exactly how it all worked together.

God, this was an amazing book. It was tightly woven, but you can’t appreciate it until you’ve read it a second time. You just have to go through the book multiple times to really understand it, and that’s so rare in a thriller. For that reason, I’m bumping my rating up another star.

I don’t like thrillers, but as soon as I heard about this book I was interested. I really wanted to like this book and I read it a lot faster than I expected to. I had to know what was going on and for that, I’ll give credit to Reid. He kept me reading until the last page to see if I was right about what was going on or if he was going to surprise me with something new. Up until the point where they arrived at the parent’s house, I was enjoying it, then it got really grotesque, then it lost me completely after that.

I won’t be including any spoilers but the reason why I didn’t like the book was the reveal at the end. I predicted it, then I hoped for something better, and unfortunately it was exactly what I had predicted. I also wasn’t a huge fan of the actual reveal, I think it’s overused and I would like to see new ways of fucking with the audience than this.

I know Caidyn reread the book immediately right after and it was suggested to do so, but I had no interest in rereading the book.

I’m glad I read it because it was on my radar of books I wanted to read and it was a newer book I’d heard good things about, but I was ultimately disappointed with the reveal and wished it could’ve been something more original.

Very obviously, we disagree about this book. On Goodreads, the average rating is 3.3 stars. Right in the middle. That breaks down to 15% for five stars, 30% for four stars, 30% for three stars, 16% for two stars, and 7% for one star. Even out of people I’m (Caidyn) friends with or following on there, there’s a huge discrepancy with how people thought of this book. It’s not exactly an easy book to read and not a likable one either. It uses common tropes in the mystery genre and tries to put a unique spin on them.